Chess can improve academic performance according to studies 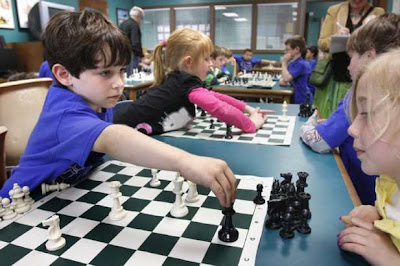 Joey Haufe, 7, and Nate Baugher, 9, sat at opposing ends of a chess board on a recent Friday at Anchorage Public School.

Joey was winning and concentrating deeply on how to finish off the game.

“He sacrificed his queen,” Joey said, explaining how he'd pulled ahead.

The two are members of the school's chess club, which competes regularly in area tournaments and meets every Friday for practice.

The club, now in its fourth year, has grown from a handful of students to about 30, and some are competing well at the state level.

Anchorage's club is reflective of a larger, resurging scholastic interest in chess, as research shows it can improve academic performance.

He said there are about 35 to 40 schools in Jefferson County that offer chess.

Most, like Anchorage, offer the classic strategy board game as an extra-curricular activity or club.

Sefo, who grew up playing chess in his native Bosnia, said it builds strategizing and problem-solving skills, which translate well to subjects like math and geometry.

Studies have documented improved academic performance of students who play chess compared with their non-playing peers.

Frequently cited is a study of elementary students in New York City's Bronx district, where most students were below the national average academically but chess players' reading skills improved dramatically.

“Also, you can compare it with life,” Sefo said. “Sometimes you win, and sometimes you lose.”

Joey's father, Rick Haufe, said chess is something his son enjoys that's good for him.

“It's a healthy activity working with his strategic thinking,” he said. “I see it applying in other areas like his schoolwork.”

Phillip Kash, who has three children in the Anchorage chess club, said he also thinks playing chess has benefits.

“There's the discipline it takes to concentrate on a game and to think ahead,” he said.

Tanya Gupta, 11, said she first joined the chess club because her parents made her.

“Now I'm enjoying it,” she said. She said she thinks it has helped sharpen her concentration.

This is her first year, so she isn't as experienced as some of the other players, she said, but she likes the feeling of improving.

“It makes me feel good about myself because I'm pretty good at something that I just started,” she said.

Source: http://www.courier-journal.com
Posted by Chess Daily News at Thursday, May 05, 2011