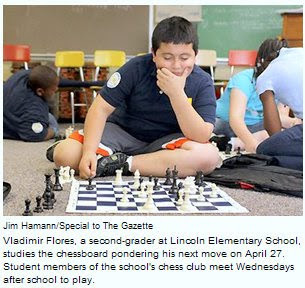 Some elementary school students in Frederick County are getting hooked on a board game that was created more than 1,400 years ago.

Chess, which has captivated millions of people across the world for centuries, is now getting a foothold among a growing number of Frederick County elementary school students.

At Lincoln Elementary, an after-school chess team meets Wednesdays, and at least 16 students in second through fifth grade spend hours hunched over their chess boards, perfecting their moves, honing their strategies, and learning to think ahead of their opponents.

Dressed in the chess club's blue T-shirts, which display their victories over opponents from other schools, students take pride in the game, and are always ready to learn new tips and tricks to help them win with fewer moves.

The chess team at Lincoln Elementary grew out of a small recess program that started seven years ago. But the game took off among students, who started teaching their classmates and whipping out chessboards in the cafeteria after class.

Today, the chess club draws in boys and girls of all academic skills, and Janet Manning, the team advisor, has to run a different program for students who are still learning the game.

"We start from as young as kindergarten," Manning said.

Lincoln Elementary, however, is not alone, and some other elementary schools are seeing an increased interest in the brainy game, which according to some researchers can help students improve their academic performance.

At North Frederick Elementary, which started a chess club in 2009, parents and volunteers are struggling to accommodate all students who want to play chess, though more than 150 students have participated in club activities and competitions.

Based on the widespread interest, chess club organizers have united their efforts this year and created the countywide Frederick Scholastic Chess League. The organization aims to promote chess across the county, provide resources for school-based chess clubs, and for the first time allow students from different Frederick County schools to play in organized tournaments.

"The idea now is to promote chess on a scholastic level," said Waguespack, who started the league after he founded the chess club at his children's school.

"I realized that there wasn't much going on with chess in the entire county," he said.

Organizers at the league now are hoping that more schools would join in for the coming year.

The league held its spring invitational competition in March, and will hold the first countywide chess tournament on June 1 at West Frederick Middle School.

Waguespack has even more ambitious long-term goals for the league. He wants to bring chess to Frederick County middle and high schools, creating opportunities for more students to use chess to expand their thinking and exercise their analytical skills.

Using chess as a scholastic tool is not a new idea, and Waguespack points to a number of chess proponents who argue that it can help improve students' concentration, memory, analytical skills and even raise test scores.

In nearly 30 countries around the world, chess is a mandatory part of school curriculum, and according to the American Chess Institute, a number of studies suggest that playing chess can be related to higher test scores for students.

A study in Texas, for example, found that non-honors elementary students who participated in school chess clubs showed twice the improvement in reading and mathematics between third and fifth grades compared to non-chess players, according to the American Chess Institute.

And in New Brunswick, Canada, when schools started using chess to teach logic in grades two through seven, the average problem solving scores of students increased from 62 percent to 81 percent, according to the American Chess Institute's website.

In Frederick County, scholastic chess is at its budding stages, but teachers, parents and volunteers agree that children benefit from the game.

For Donna Scherer, a mother at Yellow Springs Elementary, there is no doubt that being in the chess club is helping her 9-year-old son Andrew learn sportsmanship, as well as problem-solving skills and analytical thinking.

"He is in advanced math classes and I've seen improvement in his reading," Scherer said.

Andrew learned to play chess from his older brother at the age of 4, when Scherer's family lived in Britain. There, it was not unusual for elementary schools to lay out chessboards even for students in pre-school, Scherer said.

So when the chess club opened in his school, Andrew made Scherer sign him up immediately.

"He is playing with fifth-graders now," she said. "And they all love to play. It is a proud day when they get to wear that shirt."

Reina Farmer, another parent at Yellow Springs, agreed. Farmer said it is difficult to tell if her daughter Allison is getting good grades because of playing chess or the other way around. But she is confident in one thing – her daughter loves to play.

"It helps with her self-esteem," Farmer said. "She really enjoys it. She won't let me miss anything that has to do with chess."

At Lincoln Elementary, Manning has noticed that her top chess players are not always the top achievers in class. That is a great confidence booster, showing students that they can be leaders in different areas, Manning said.

The game is also teaching students to take a defeat gracefully. But while they enjoy a good win, it is not uncommon to see the two opponents sitting together after the game trying to analyze their moves and figure out what led to the defeat.

And for Manning's students, there is no doubt that playing chess is exercising their brains.

"Chess is a strategy game," said Bernadette Jones, a Lincoln Elementary fourth-grader who has been on the school chess team for two years.

"You learn to think ahead," she said.