Lessons for Life in 64 Squares 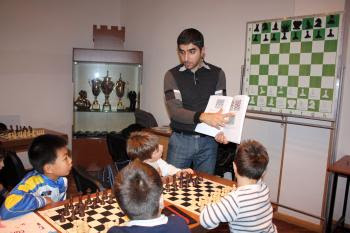 Lessons for Life in 64 Squares
Beloved in Armenia, chess becomes a mandatory part of the country’s curriculum.
by Sona Kocharyan

YEREVAN | Arbi Khachatouryan teaches chess for a living, not an unusual job in a country where chess masters are treated like sports stars.

Khachatouryan, 30, works at the state-run Chess Academy of Armenia, but in September he began giving lessons twice a week at a primary school in Yerevan. He says he enjoys seeing second-graders’ relish for checkmating their classmates.

Not only their classmates. Grigor Gevorgyan, one of Khachatouryan’s students, revels in his newfound skill, boasting, “My grandfather is the best chess player in the world and I once mated him.”

But it is a class, after all, and there’s more to it than the thrill of conquest, Khachatouryan says. “Every day we start by going over the rules taught during the previous lesson. The children are eager to start their games, but revision is very important, too.”

Khachatouryan is not the only chess player teaching in Armenian public schools. In fact, since September more than 1,000 expert players and chess-savvy schoolteachers have been instilling the rules of the ancient game to 7-year-olds.

Armenia became the world’s first country to teach chess in every primary school and to include it in the national curriculum, Education and Science Minister Armen Ashotyan said in August, just before the new school year began and chess became a compulsory subject for second-graders.

“In the past Armenia often drew on the experiences of leading countries when making education reforms. Because of this innovation, the situation has changed. Now the eyes of the global educational community are on us,” Ashotyan said.

In 2010, the government tasked the Chess Academy with setting up a course. The Education Ministry experimented with teaching chess in two Yerevan schools in spring 2011 before recommending the program be expanded nationwide at a cost of 600 million drams ($1.5 million) in the 2011-2012 school year. The academy is responsible for writing textbooks and manuals and training chess teachers.

The academy even produced a psychology handbook to help chess teachers better understand how young children think and learn.

All 1,287 Armenian primary schools where second-grade classes are offered are taking part in the chess program, according to the Education Ministry. There are about 35,000 second-graders this year, all taking twice-weekly chess lessons. One lesson is an addition to their normal program and one replaces a physical education session.

Most of the new chess teachers are chess experts, and they are joined by teachers of math, informatics, and physical education, according to program organizer Varsine Manandyan of the Chess Academy.

After going through training sessions and seminars, aspiring chess teachers had to take an exam before 1,150 of them were hired for terms ranging from one to three years.

Chess experts do not expect every Armenian youngster to become a lifelong player, but they say the subject can help children in other areas of school and life.

“Six or seven is the best age for children to start learning chess,” says Tigran Petrosian, a 27-year-old grandmaster, no relation to the Tigran Petrosian who was world chess champion in the 1960s. “I also took my first steps into the field at the age of 6.”

Some chess instructors think the game will help children better understand subjects such as algebra, geometry, and logic.

“This game develops other values. The child learns to think, to make decisions, to play an honest game, to win and lose,” Chess Academy director Smbat Lputian says.

Armenians have an enviable record in the annals of modern chess. The country’s latest honor came last summer when the Armenian team led by Levon Aronian, the world's second-ranked player, won the world team chess championship. The Armenian team was heavily weighted with players who had won two consecutive world Chess Olympiads, in 2006 and 2008.

Chess has been among the country’s most popular pastimes since the original Tigran Petrosian became world champion in 1963 by beating one of the greatest Soviet players, Mikhail Botvinnik. Petrosian successfully defended his title in 1966 against Boris Spassky, finally losing it to Spassky in 1969.

“I was a little boy of 8, living in the small city of Meghri” at the time, writer Mesrop Harutyunyan says, recalling how Petrosian’s achievements set off a chess boom in Armenia. “I remember that everyone in town followed his matches and discussed every single move he made. It was like that not just in my city, but the whole country.”

Memories of past glory help explain why the government’s decision to teach chess in schools met with wide support. Another is that the country’s powerful president, Serzh Sargsyan, is also the chairman of the Armenian Chess Federation and liked the idea when Lputian, the federation’s vice president, suggested it.

The program has also been praised by educators, teachers, and parents, and Lputian says countries such as Russia, Azerbaijan, and Georgia have expressed interest in adopting it.

“My daughter takes painting classes twice a week. She’s also studying piano in a music school. So she wouldn’t have time to start learning chess if the school didn’t make it possible for her,” says Lilit Hakobyan of Yerevan, the mother of a second-grade student.

Gayane Saroukhanyan, a primary school principal in Yerevan, says the program is popular with her students’ parents. “The parents of third- and fourth-graders wish their children were also learning the subject, but in my opinion, this should be a gradually developing process,” she said.

And it will be. Compulsory chess lessons will be extended to the third grade next year and to the fourth grade in the 2013-2014 school year, according to Education Minister Ashotyan.

Article and photos by Sona Kocharyan, a journalist in Yerevan.

Email ThisBlogThis!Share to TwitterShare to FacebookShare to Pinterest
Labels: Armenia, Chess in Education, Chess in the Schools