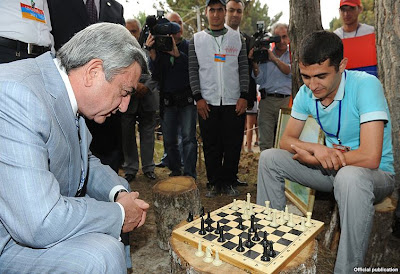 Chess has become a mandatory school subject across Armenia for every child over the age of 6.

School officials in Armenia say the move is aimed at fostering independent strategic thinking among future generations at school, at work, and in society.

The plan took effect beginning with the current academic year. More than 40,000 children in about 1,500 Armenian schools already have received chess textbooks and chess pieces. They are now receiving formal lessons twice a week from 1,200 specially trained and selected teachers.

Vachik Khachaturian, who has been teaching mathematics at school for years, decided to teach chess, too. He says the game is interesting and useful for his young students at Yerevan's Secondary School No. 125.

"First of all, chess is a game and it is fun. At the same time, it is an intellectual game," Khachaturian says. "Along with mastering the game the children learn to think independently. This [independence] makes the game interesting for them, especially at their young age."

Armenia already is one of the world's leading chess nations. The country boasts more than 30 grandmasters and gold-medal winners at the International Chess Olympiads in 2006 and 2008.

President Serzh Sarkisian presides over Armenia's Chess Academy and the national Chess Federation. He also has been involved during the past three years in developing the plan to teach chess in the nation's schools.

The director of Armenia's Chess Academy, grandmaster Smbat Lputian, initiated the project to introduce chess as a mandatory school subject. He says he strongly believes in the positive impact that playing chess can have upon children of a young age.

"Chess is an amazing game, amazing as I see only positive things in it," Lputian says. "It is a very fair game and this is the most important thing."

Sitting amid chessboards in the academy's tournament room, Lputian explains that he sees chess as a way to develop the ability of children to think independently.

"It makes you think and map out a strategy and while working on it, you need to assess your every move in advance and find the right one," Lputian says. "And with every move you need to make a decision, the whole game is about making decisions and these decisions should be primarily correct. The game makes you more accustomed to making serious decisions in difficult situations."

Chess also is regarded by most Armenians as an inclusive and universal activity, capable of uniting people of different ages and physical abilities.

Nevertheless, the project has encountered some opposition in the former Soviet republic.

Psychologist Ruzanna Gharibian is a supporter. She says playing chess helps the children not only to improve intellectual abilities, but also to develop essential personality characteristics that high-tech computer games are unable to provide.

"You know it is much better to create an atmosphere of real moral victory [for a child] by giving them these chessmen rather than giving them a computer and letting them experience victory through different aggressive [computer] games," Gharibian says.

Gharibian says playing the game of chess helps children develop responsibility and accountability for their actions.

Armenian chess players are greeted by thousands of people in Yerevan's Liberty Square to celebrate their victory in the 2011 World Chess Team Championship in July.
"You make a move and you bear a certain responsibility for the move you made," Gharibian says. "While playing computer games, children do not feel responsibility for their actions."

Studies conducted by Western scientists and chess masters in primary schools have confirmed that learning chess at an early age improves the reading performance of children, strengthens their problem solving skills, and has a positive effect on concentration, memory and calculation.

Email ThisBlogThis!Share to TwitterShare to FacebookShare to Pinterest
Labels: Armenia, Chess Benefits, Chess in Education, Chess in the Schools