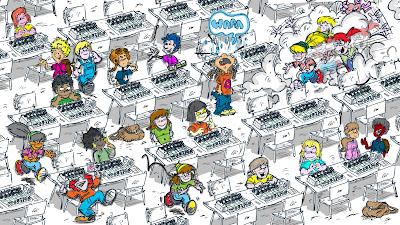 Should every child be made to play chess?
By Vanessa Barford
BBC News

Armenia is making chess compulsory in schools, but could mandatory study of a board game really help children's academic performance and behaviour?

Every child aged six or over in Armenia is now destined to learn chess. The authorities there believe compulsory lessons will "foster schoolchildren's intellectual development" and improve critical thinking skills.

The country has plenty of reasons to believe in chess. It treats grandmasters like sports stars, championships are displayed on giant boards in cities and victories celebrated with the kind of frenzy most countries reserve for football.

Chess is nothing less than a national obsession.

It may only have a population of 3.2 million, but Armenia regularly beats powerhouses such as Russia, China and the US and its national team won gold at the International Chess Olympiad in 2006 and 2008.

Added to that, the Armenian President Serzh Sargsyan has just been re-elected as chair of the Armenian Chess Federation.

Now the chess-mad country is investing nearly $1.5m (£920,000) to teach all of its children. But for other countries constantly strategising about how to boost child development and education, is making study of the Sicilian and the Queen's Gambit a good idea?

Proponents of chess in schools do claim some evidence. A two-year study conducted in the US by Dr Stuart Marguilies found that learning chess improved reading test scores and reading performance in elementary schools.

Malcolm Pein, chief executive of Chess in Schools and Communities, a programme that puts chess into UK schools, says there are lots of reasons why chess has a positive impact on primary school children.

"Not only does it give children good thinking skills and improve concentration, memory and calculation, but it teaches children to take responsibility for their actions.

"There are also behavioural attitudes and social attributes to the game too. Children shake hands at the start, and although it's not deathly silent in classes, it's reasonably quiet and disciplined."

Far from it just being the case that more academically-minded people are more likely to play chess, he says the game is a very universal and inclusive activity that can be played at all standards.

"Someone who is four can play someone who is 104, someone that can't walk around can play a top class athlete. Sometimes children that have been overlooked in other ways - maybe the quietest or physically smallest child in class - could be the best.

Chess is a very addictive process, a positive drug for children”

"The other outstanding thing about chess is it's so cheap, so it can really help children in areas that are economically disadvantaged."

Pein is a big supporter of chess being made compulsory at school and recently made a submission to the government's National Curriculum review. It recommended that one class of chess - "or other thinking games like bingo" - is made mandatory every week for children in Year 2 (aged six) or 3 (aged seven).

He concedes the game can be challenging for young children, but argues that by the age of six or seven they are more than capable of picking it up.

English grandmaster and Times chess correspondent Raymond Keene agrees with targeting six-year-olds at primary school - and not just because he thinks it is the optimum time to catch children with the potential to make it big.

"Chess draws from brain power, not experience - it's not like writing an epic. So if a child is good at six, they could be a grandmaster by the time they are 12," he enthuses.

He says "chess is a very addictive process, a positive drug for children". Even when it is played online, it is much better than video games or television, he adds.

But although he thinks teaching chess in schools could be beneficial, he would stop short of making it compulsory.

"There are plenty of other things that could benefit from being compulsory too, I wonder whether it would be appropriate," he says.

"Also, in Armenia the government is knocking at an open door. Chess is already so embedded in its culture, it's bound up in its national psyche and ambitions. In the UK making it compulsory might actually turn people off."

Chess players may be convinced of chess' credentials, but could education experts be persuaded?

Katherine Birbalsingh, the teacher who came to public notice after a speech to the Conservative conference criticising school standards, and who is now setting up her own free school, says it is easy to see how chess would be a useful tool.

"I'm a great believer in knowledge acquisition - and chess is obviously a skill - so I can understand why it would be a good thing to teach children. My question is, what would you lose instead?

"There is so much to learn, so many subjects to put into the curriculum, it would be a shame to lose something like music or art for chess."

Chris Woodhead, the former chief inspector of schools in England, says providing chess in schools - either through clubs or classes - could be helpful, but compulsory classes are not the way forward.

"I'm not sure whether it would have a beneficial impact, but chess is an activity many people find intriguing and satisfying, so it's got to be a good to have the option," he says.

Russell Hobby, the general secretary of The National Association of Head Teachers says fostering strategic thinking is an essential employability skill. But he can't support the idea of mandatory chess.

"No more compulsory subjects. It's about finding what works with each group of children."

And in a curriculum already subject to numerous priorities, chess may struggle to make the grade.